After about a decade in the making, the Food Safety Modernization Act (FSMA) became whole on May 26, 2016, when FDA released the last of the seven rules that are meant to be this country's biggest overhaul of the U.S. food safety system since that system was created in 1938.

One key deadline already has passed: By Sept. 19, most food companies that are not considered small businesses were to comply with the Hazard Analysis and Risk-based Preventive Controls (HARPC) rule of FSMA. There are more deadlines coming up – we list them in a special report Pest Control’s Critical Role in FSMA. Download your copy of the Special Report

FSMA fundamentally changes the way the FDA enforces food safety – essentially moving the agency from being reactive to proactive. Preventive controls are the foundation of the new approach, and HARPC embodies the three keys to this new thinking on food safety: hazard analysis, risk-based planning and preventive controls.

Under the HARPC rule (21 CFR 117.126), which is similar to USDA's Hazard Analysis and Critical Control Points (HACCP) program, the owner, operator or agent in charge of a food facility must prepare and implement a written food safety plan. That plan must be prepared by or have its preparation overseen by one or more “preventive controls qualified individuals.”

While the big picture of FSMA focuses on preventing widespread food illnesses created by improper processing or sanitation practices and even terrorism, a critical but sometimes overlooked component is pest control.

"Before FSMA, pest control was a Good Manufacturing Practice and certainly something you needed for prevention, but most of the time it was off to the side," says Zia Siddiqi, director of quality systems at Orkin Pest Control. "But clearly in FSMA Section 103, 'Hazard Analysis and Risk-Based Preventive Controls,' when food processors identify critical control points and risks, you need to consider risks coming from pests."

And that's not just for FSMA, but for most third-party certifications, including those under the Global Food Safety Initiative. "You need to list the pests that could come into your facility, establish a threshold—is one mouse OK, but two is critical?—and then establish a control point where you will control the problem," he says. 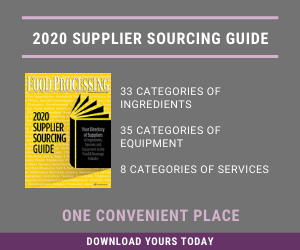