One of the big takeaways from Food Processing’s 48th annual R&D survey is...taking away.

In a trend that’s been going on for a few years, a priority of product development is removing ingredients that interfere with the clean labels so desired in today’s market.

Our survey was taken online from March through early April, with 258 total responses. Regarding priorities, “cleaning up current products” came in at 16 percent, behind “really new product development” (37 percent) and “existing product improvement” (20 percent). Another 13 percent said their biggest priority was “product line extensions,” while 10 percent named “cost control.”

When asked which specific types of ingredients they expect to work on most this year, the first four named by our respondents were things they wanted to remove: added sugars (27 percent), GMO ingredients (21 percent), sodium and synthetic colors (19 percent each). The top ingredient category that R&D teams want to add, fruits and vegetables, came in at only 16 percent. Others included fiber (10 percent) and vitamins (9 percent).

In this regard, R&D teams are only doing what they’re supposed to, which is follow consumers’ preferences. According to Innova, close to three-quarters of American consumers “strongly agree” that it’s important for foods to have mostly recognizable ingredients. According to a poll by PR agency Ingredient Communications, just about that many are willing to pay more for such products.

In some cases, consumer preferences get translated directly into trade customer preferences. One employee of a pet food manufacturer said, “Due to Petco's new rules, all pet foods must be all natural, no artificial dyes, preservatives, etc.”

For some of our respondents, impetus for removing added sugars was undoubtedly sparked by the new regulations mandating their listing on the Nutrition Facts label. “Those changes [to the label] are the most important reason for our changes,” one wrote.

But overall, the upcoming changes to Nutrition Facts wasn’t a big motivator: 70 percent said they weren’t making any changes on that basis, and only 25 percent said they were. One respondent wrote that his team was removing sugars and other ingredients, “but not due to the changes in the panel. We are making changes based on customer desires which include healthier options.”

One of the biggest changes to the formulation landscape will occur by 2022, when foods that use genetically modified, or bioengineered, ingredients will have to say so on their labels. Non-GMO certification is a goal for 49 percent of our respondents; the rest will either use the USDA’s bioengineered label, put their GMO notifications online via the SmartLabel phone-scan code from the Grocery Manufacturers Assn., or are already declaring on their labels that they use GMOs.

The drive to get GMOs out of products jibes with the wider drive to “clean up” ingredient labels. This takes many forms; written responses included: “Removing artificial ingredients and colors, removing complex/complicated ingredients”; “removing modified starches”; “No sugar. Natural flavors. Quality ingredient forms”; “increasing the use of natural preservatives, reducing the use of allergens.”

One said simply, “Everything in our power.” One wrote, probably puckishly, “Working with a label company to produce laminated labels.” Another raised a concern about cost: “Substituting ingredients on a case-by-case basis since customers don't all have the same definition of clean label, especially after they see the price impact.”

Other goals sought after by R&D include: “Shelf life is a priority to improve cost efficiency from seasonal buys and reduce waste”; “Opening of new facility has us cutting cost in extra budget items”; “Don't need to work on ingredients, maybe work on texture, without any additives.”

Time of the essence

Whatever the goals of R&D, one thing a lot of our respondents say is that they have to reach those goals ASAP. “Steadily increasing pressure” was reported by 43 percent; another 8 percent said “very intense pressure, and it’s worsening. One respondent wrote: “One-man show...feet taped to the pedals! Innovate or die!”

Hank Cardello, a former food industry executive and a senior fellow at the Hudson Institute, says that the industry has been historically slow in introducing new products, partly because of their failure rate, which has gone as high as 90 percent. But larger companies are facing competition in innovation not just from smaller, niche firms, but from increasingly specialized private label offerings. That increases the danger of being left behind, he says.

“Is it risk if I make a boo-boo with a failing product or if I do nothing for a year, am I in worse shape?” he says. “And I think that’s what’s happening right now – they’re realizing that something’s better than nothing.”

Eddie Yoon, a consumer industry consultant and author of the book “Superconsumers,” says that the pressure for increased speed to market is part of the general pressure for better short-term financial results. “It’s a Wall Street problem again,” he says.

Many food companies are pushing out new products simply in the hope that it increases the odds that one of them will stick, Yoon says.

“Basically, everybody’s batting averages are getting worse and worse,” he says. “So they’re trying to solve it by saying, Let’s get more at-bats. The right answer would be to slow it down and emphasize quality over quantity, but the very nature of the pressure is, ‘I have no idea how to generate a winning innovation. I believe it’s totally random, and so therefore I’m not going to bother trying to up the odds. I’m just going to increase the frequency of my attempts.’”

Who’s on the team?

As for how innovation comes together, our respondents reported working from a variety of models. Almost two-thirds (62 percent) of our respondents have a formal product development team; 28 percent don’t, and 8 percent say “sort of.” These were mostly small companies, some of them very small, like the one who wrote “we are a small company of 6, so there is only 1 PD [product development] person.” Another wrote, “Myself, sales, plant manager and QA manager as needed.”

The most common members of the product development team, after R&D personnel, were the ones who tend to be on either side of R&D: marketing (55 percent) and manufacturing (50 percent). Other common team members include corporate management (32 percent), purchasing (27 percent) and finance (18 percent). Write-in choices included quality assurance and, in the case of a private label manufacturer, “R&D staff from our clients.”

Several respondents remarked that R&D’s priorities, or lack thereof, were directly affected by management. “Many items are due to major changes in executive structure,” said one. Another poor fellow said only, regarding his department’s objective, “It was not disclosed by management.”

This attitude is sadly common, according to many industry observers. Yoon says flatly: “No one really fully understands how important R&D is in food – even the R&D community.”

Cardello says more food company managers need to think of R&D as an equal partner. That’s not always easy, since not many of them have direct experience with R&D.

“For packaged goods companies, the pathway to senior executive positions generally runs through brand management, marketing, etc.,” he says. “The marketers’ instinct is 'How do I squeeze a little more business out of my brand?' as opposed to 'How do I make the next leap?'”

The structure of the development team, both internally and in the sense of how and to whom it reports, reflects how many food companies are having a hard time innovating, says Rick Slayton, CEO of Slayton Search Partners, an executive search consultancy. Slayton says many food companies are struggling to reinvent themselves, to keep pace with rapidly changing consumer preferences and to achieve truly breakthrough innovation.

“The challenge is pace – often these acquisitions aren’t keeping pace with the slow growth of their core business, creating significant pressure within research and development teams,” Slayton says. One trend he sees among companies that succeed at product development is having the R&D leader be responsible for all functions of a new product, including “product development, process development, and often packaging and quality functions.” This is easier in small companies than in larger ones, he says.

R&D teams vary, not only in composition, but in the frequency with which they meet. The most common schedule apparently is no schedule at all; 26 percent said their teams don’t meet regularly. About as many said they meet weekly or more often.

“A big part of this is whether the company has formal processes and just how structured they are,” Slayton says. “Some companies tend to be less process oriented, loose, and non-structured, and feel product development teams should meet [only] when there is cause. In other instances we see companies pull together cross-functional product development teams that pair R&D, sales, marketing, and supply chain with the intent of visibility across the entire product life cycle (from concept through to commercialization and all touch points).

"In many instances, these companies set quarterly and monthly progress updates to track with formal stage gate ownership,” Slayton continues. "These companies often develop a ‘fail fast’ methodology whereby they can get buy-in and anticipate in a timely manner (versus the shock of ‘what comes over the wall’).”

Ideas, as they are wont to do, come from multiple sources. The most common is “general market research,” at 78 percent. Other popular choices are “internal research,” 53 percent; “open innovation,” 40 percent; “focus groups,” 36 percent, and “research provided by suppliers,” 35 percent.

If budgets are any indication, R&D remains at least a significant priority for the industry. Half said their R&D departments’ budgets remained the same as last year, and 20 percent more said it had increased. Another 19 percent said they didn’t know. One respondent said it’s not about budgets: “Our R&D department operates on projects dictated by the owners/sales/marketing regardless of budget.” Similarly, a respondent from a small company wrote: “I do R&D, quality control, customer complaints. We don't have a set budget, we usually go with what is needed.”

But Cardello is emphatic that food R&D tends to be underfunded. He points out that according to research by PwC, the biggest food companies spend only 1.4 percent of their revenues on research.

“Marketers tend to have the most money in the company – buying the media and everything else, there’s a lot of money for that, for market research, etc.,” he says. “And we know that the innovation R&D side doesn’t have nearly as much capital to work with, and I think that has to be brought back to balance. From the CEO and board level, I think they need to ensure that if they want to be successful going forward. The old model’s not going to work.” 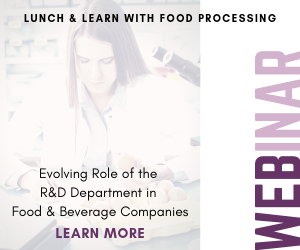